Whew!  What a week!  For the kids and the adults.  So much testing for the kids, and lots of information for us.  On Monday, we arrived with three nervous, uncertain kids.  We were greeted by the smiling faces of some of the staff who quickly ushered them through the office to show them the routine…..where to put their lunches, how to read their daily schedule, etc.  They came back looking a bit timid still.  Just then, Dr. Conway walked in and said, “Kids, before you get started, come outside.  I want to show you something.”  After a minute I peeked out the door to see 3 smiling faces laughing and examining a souped up mountain bike.  He had their attention!  In that moment I saw their shoulders relax and their chins tilt up a little.  To make it even better, Dr. Conway sat on the couch and softly explained the day to them. (okay, maybe I was too harsh in my initial impression post about those couches…they are comfy…but still…) In that moment, I wanted to give Dr. Conway a big bear hug for easing their anxious hearts (and maybe mine too). 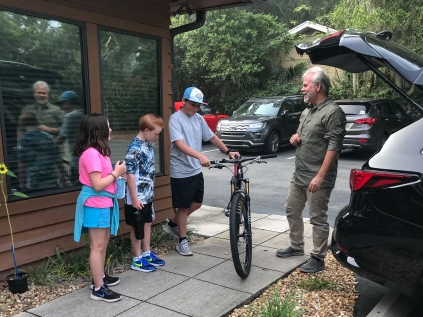 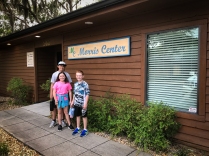 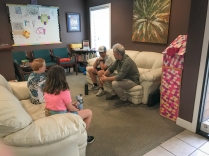 You know how the first week of school is fairly easy…..more about learning the routine than actual academics?  Well, this first week  was NOTHING like that.  They hit the ground running and never slowed down.  The comprehensive testing usually takes 1 week for a kid, but since there’s three of them, they’ve had to split it up over two weeks.  When they aren’t testing, they’re already starting the first language sessions for the program.  The clinic runs a tight schedule every day so that the kids can maximize each moment of learning.  According to Brady, the 10 minute breaks between sessions last only 2 minutes.  OT and scheduled outside play are a welcomed escape from the rigorous mental work required.  We’ve heard, “my brain hurts,” multiple times by all three of them. And you know what?  We believe them!  By the week’s end we had no trouble getting them to bed. They are exhausted.  Each has had his/her share of meltdowns and arguments so we’ve offered a large amount of grace since we understand how hard they are working.  This is some intense testing and we are only on week one. Bless it.

While the kids were busy testing, Mom and I spent about 8 hours at the center in meetings. The actual number of staff members at the clinic  is surprisingly small to me.  It almost feels like they are running on a skeleton crew.  Only certain staff are certified to administer testing, and their plates already appear overloaded.  By the end of the week I could see fatigue on both the kids and the staffs’ faces.  For good reason too!  Some of the staff members aren’t usually in the office 5 days a week but did so for us.  Administering, then scoring the testing results for three is no doubt time-consuming!  These people wrapped up a tough week of end-of-treatment testing for 2 of our friends from Arkansas, then  put in another strenuous week to get us started on our journey.  To their credit, they gave us their undivided attention at each meeting, never rushing us to wrap it up and never showing their fatigue.  They listened patiently, explained things thoroughly and took ample time discussing each kid. We left every meeting feeling better and better.  Why?  Because they love what they do, believe in the program and truly want to see our kids succeed.  The meetings included Clint, Davin & Jamie via FaceTime and left us feeling impressed….and surprised…..and intrigued…..curious and fascinated by what we’ve heard.  We had individual meetings for each child with the psychologist, occupational therapist, and neuropsychologist (i.e. brain scientist).The information we received at each meeting was more than we expected.  Within the first 2 days, they had already identified areas of concern that aligned with concerns we’ve had with each kid.  Even more so, they were pointing out areas of deficit we didn’t realize had anything to do with dyslexia.  It was like an “ah ha” moment for us.  So much of the things our kids struggle with outside of the academic realm are affected by this inefficiency in their brains.  Already we’ve learned so much, yet it’s only the beginning.  I can’t wait to get even more information in the weeks ahead.